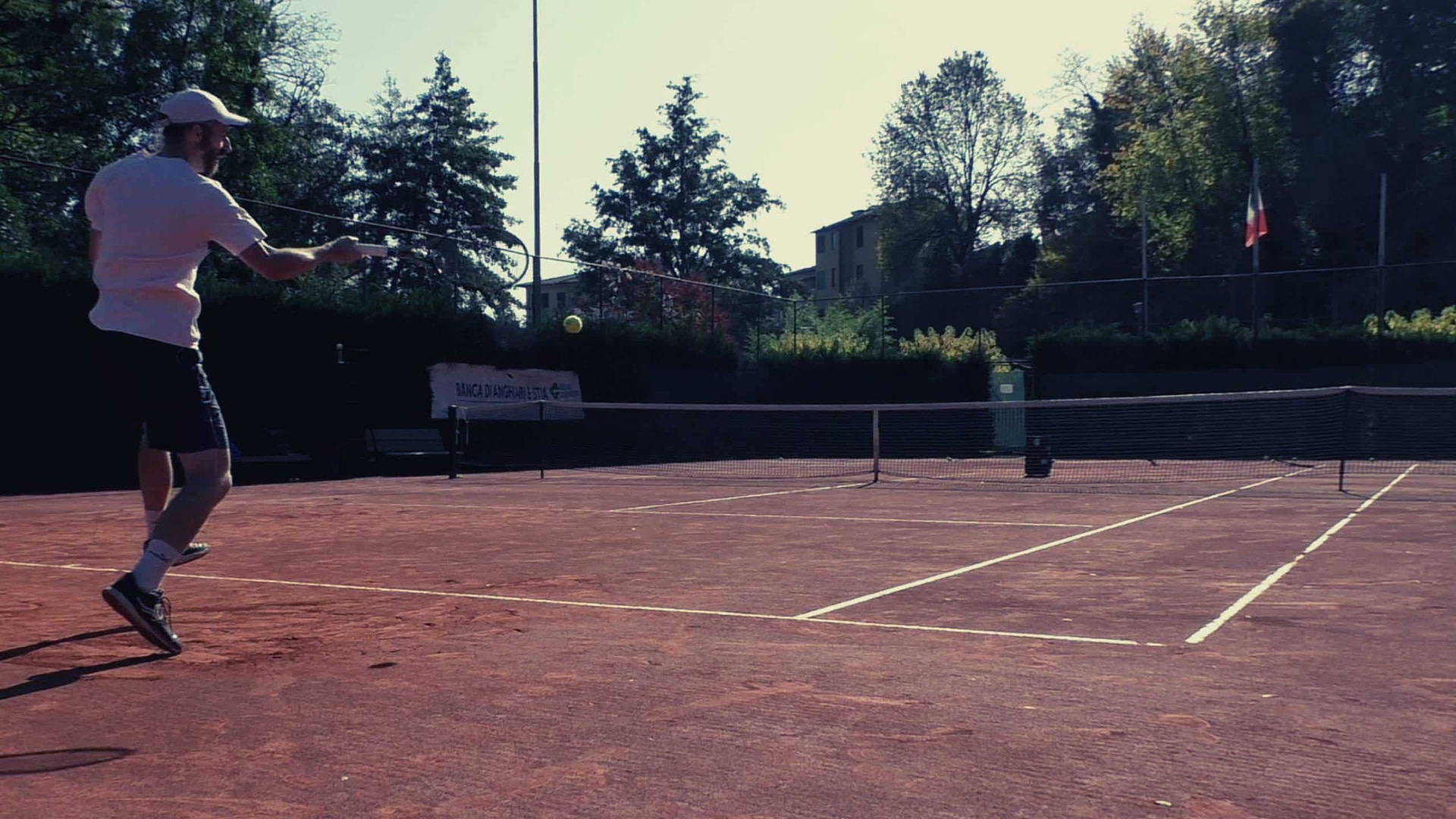 Did you know that most of adult club tennis players still lack having that Big, Dangerous Topspin Tennis Forehand?

The topspin Tennis Forehand is the “must have shot” for any tennis player, and it does not matter if you are playing at a club level, National Tour or attempting to play ITF/ATP.  The ability to generate lots of spin can put you in the driving seat in any match.

Lets just look at Rafael Nadal and the huge amount of Spin he puts on every ball he hits, which is without a doubt one of the biggest factors in his success.

“The ability to hit every ball with great amount of spin can help you massively and has lots of advantages.”

When you can hit a topspin, you have more control, you can hit the ball much harder and the ball will still stay inside the court, in other words, once you master the Topspin Forehand, its very hard to overhit as the ball will be dropping down which gives you much more room to be able to hit it as hard as you can…

The topspin tennis forehand is the primary shot in the modern game of tennis. It is being used by ATP Pros at the professional level to dominate points from the baseline and is responsible for the drastic increase of tennis being a power game. Almost every single pro tennis player on tour uses a topspin forehand to control shots from the baseline, some having more spin and some having less.

Unlike the “Old School – Classic Forehand” you now want to find the “More Open Stance” when you getting in the right position.

You want to focus on finding well balanced position by keeping the right distance from the ball and still be able to use your body in the right and effective way.

For many players at a club level this is The no.1 biggest struggle – to be able to hit the ball from Semi Open or Open Stance as they clearly were just used to more traditional “Close Stance”.

Close stance can do it to, but it will be harder to generate lot of Topspin…

To understand this well, lets look at some photos of me hitting the Topspin Forehand:

You can feel that all is transferred from my Right Leg and from well Balanced Position with Open (or Semi Open) Stance. 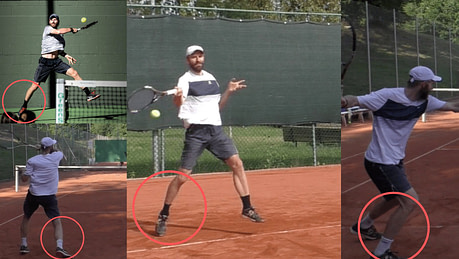 And if you don’t master the Topspin on your Forehand, it will be much more difficult for you to be able to compete against players who do use it, unless you have an amazing “Classic Flat Forehand” that you can really rely on!

So I highly recommend to any player to work on it and to have it in your Arsenal, as it will increase your chances of winning your matches!

Here are 5 Simple Steps you want to focus on next time you working on your Topspin Forehand:

First thing you want to get under your skin is the feel for the ball and racket swing.

You want to go from 6 to 12 o’clock position! and you need to be very relaxed with your arm and your wrist – these 2 are most crucial things right now!

So, the no.1 thing you want to work on is the “WHIP” (as seen when Rafa Nadal plays)

In first exercise you start right at the Net as you need to get into that right “Swing Path” and you focus on getting the Head of your racket just to brush up the net – like if it was a Tennis Ball, from the 6-12 O’clock Position. >>

Want to learn much more?

STEP 2 – Hitting the ball from your hand 1 Meter from the Net:

At this moment you take some balls and you will work on getting that ball over the net by hitting the exact motion you just worked on when hitting the NET only.

Now, you need to get the ball over that net with SPIN ONLY! >>

You simply feed yourself by dropping the ball off your hand and by standing around 1 – 2 metres from the net.

If you hitting the net, you need to keep on working on this one until you get every single ball over the net with that nice TOPSPIN FEEL! 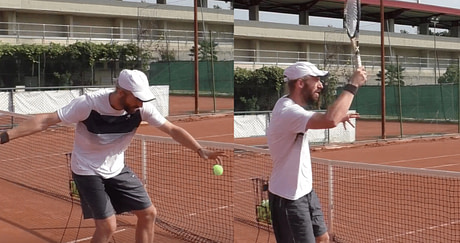 STEP 3 – Hitting Tennis Forehand from the Service Line = Getting Used to a New “Whip Swing Path”:

Only once you feel O.K. with the Step 2 you now move up to the Service line and start hitting the ball.

There is a great and simple exercise – when you just work on that “Whip” – on that feel and a new more Topspin Path of your Racket….

You only focus on getting use to this new “Whip Swing Path” with a same follow through as Rafa Nadal has! >> 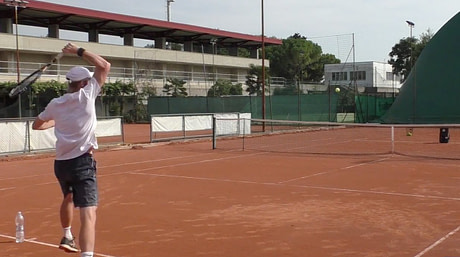 Once you feel more comfortable hitting it with a “New Topspin Swing Path” from the service line, you can now move up to 3/4 of the court and eventually to the Baseline.

At this time you are going to be adding more and more speed, so the Racket Head Speed will be increasing, which will give you much more Topspin and more control of the ball.

You also focus on hitting it from the “Open Stance” or as Open as you possible can (Semi Open on some balls will be needed of course), as this will be the main shift for you, to be able to transfer weight from your back foot into the ball.

At this moment you still focus on the “WHIP – Rafa Nadal’s Like follow through” as by doing so, you only focus on generating TOPSPIN..

Before the contact – You drop the racket as low as you can and you are only brushing the ball up, you are not focusing on adding too much power into it yet.

Also you focus on hitting your Balls pretty high above the net and balls should be nice and deep bouncing in between 3/4 of the court and the baseline on the other side!

Remember, POWER comes after, not before…First is Control, Feel and Topspin, only after that you can focus on adding more POWER!

Want to learn much more?

Once you master all prior 4 Steps, its time to add the normal follow through (even thought you can also keep the Nadal’s one, if you like).

SO, lets call it for the moment – The Djokovic’s Style Follow Through.

The great thing about passing all Steps before is that by now, you gonna have a MASSIVE WHIP with great amount of Topspin, so even if you follow through like Djokovic now, your racket will have a new Swing Path that is much more focused to generate TOPSPIN rather than hitting the ball flat.

“Do not get fooled, Djokovic also has a great Topspin on his Tennis Forehand, not as much as Rafa Nadal, but also very – very effective .”

So the last step will be to add the “Normal Follow Through” either over your left shoulder or “into your pocket” – whatever feels more natural for you, there is no right way – you have to feel what works best for you and how most naturally it comes to you!

And once you master this, you can start adding more and more power and just keep on training until you get every Forehand nice and deep with great amount of Topspin, so you can put your Opponents under constant pressure every time you touch the ball!

Do various exercises to practice over and over until you got it, and then practice even more to FULLY MASTER IT! 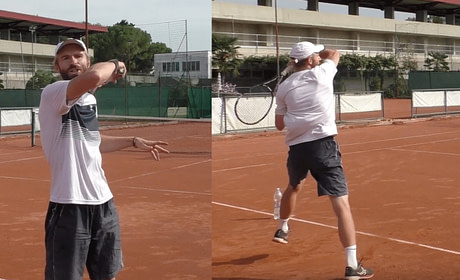 “When you gonna have that HUGE, MASSIVE TOPSPIN, you will find it much easier to win your points and to stay in the DRIVING SEAT!”

I hope you enjoyed this article!

And, if you would like to LEARN much more & finally master the Topspin on your Forehand so you can start wining your points with much more confidence which will help you win more of your matches, just hit the link below where you get my brand new program “Forehand Topspin Mastery” with 60% OFF >>

Or Get Started with my FREE Forehand Masterclass HERE >>

Thanks for your time and have a great training week full of awesome tennis forehands! 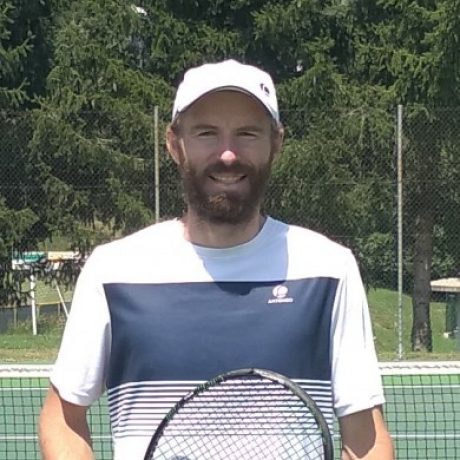 Pro Tennis Coach, Semi Pro Tennis Player and Founder of TennisFit® App and PLB Tennis Method®. Over past 10 years, Jan has helped over 3000 club tennis players worldwide thanks to his online tennis programs that are specifically designed to get results. Jan is a dedicated and inspiring tennis pro and well respected tennis authority not just in Europe and Italy where he coaches on court, but all over the world thanks to his outstanding online tennis instructions.